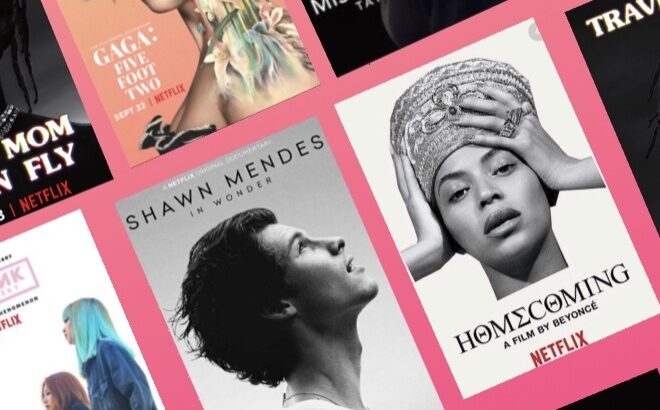 Music documentaries are on of the best type of documentaries. They give you a total, without-the-lights insight into musicians real life behind the scenes. They also inspire many people and change their perspective on fame.

The Teen Edit has listed down 6 of our favourite music documentaries on Netflix that you can binge watch and possibly learn a lesson or two. The following documentaries are inspiring, insightful and intimate and totally worth the watch. Or maybe, you could just have a good fan moment.

Miss Americana is an intimate behind-the-scenes look into the musician’s life. Directed by Lana Wilson, this documentary is a view into her life, what it’s like being in public view all the time, trying to keep up her reputation with the media spreading rumours everyday. She even discusses some sensitive topics like how she overcame her eating disorder, her personal career ups and downs and past struggles with people who tried to steal her thunder. Throughout the documentary, it seems like she’s talking to you and it has a very personal point of view that is thoroughly enjoyable.

You will literally be In Wonder of this documentary featuring Shawn Mendes. Directed by Grant Singer, in this documentary Shawn Mendes opens up about a lot of personal topics. He talks about his fame, relationships with people most important to him and gives an insight into his current stardom and musical future. It’ll feel like a personal experience and is sure to give you goosebumps throughout.

This documentary gives a clear look into Lady Gaga’s stardom. She dials it back down and portrays her struggle with her health issues and also shows a vulnerable look into one of her most critical phases in her career. Fame can be lonely at times, and she hasn’t hidden that part from viewers. This is a true depiction of the life of the woman behind the glamour of being a celebrity.

Homecoming, a film by Beyoncé is an in-depth, very detailed look into her 2018 hit performance at the Coachella music festival. It reveals her emotional way to fame, from creative to cultural. Watching it has been labelled as an extremely uplifting experience for viewers and her pride for her culture just resonates through.

LIGHT UP THE SKY – Blackpink

In this emotional but entertaining documentary, fans get to see how much hard work the entire group puts in to have reached where they are today. It has been encapsulated in this documentary with raw emotions and each member’s individuality and humility really shines through. The world famous Korean Girl-Band shows the amount of effort they put in to follow their dreams and accomplish them.

In this super intimate documentary featuring Travis Scott, director White Trash Tyler and Cactus Jack expertly capture his lifestyle as a world famous rapper. You get a front row seat of an insight into his life, capturing the formation of his Grammy-nominated album ‘Atsroworld’, his life as a performer and career highs.