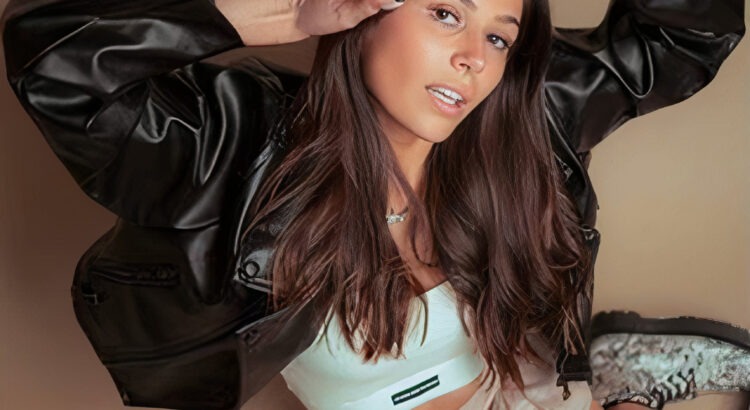 TikTok grew to become one of the most popular social media apps among teens in 2020, and fifteen-second videos took over the internet by storm. From lively, entertaining dances to body positivity and everything in between, it’s safe to say, TikTok had officially become one of the most used apps by the young and influential, the Gen Z. While settling down at my laptop screen, a box pops up that reads ‘Azaria McKinnon’, looking back at me was the 17 year old girl who went viral on TikTok out of boredom, but her rise to fame hasn’t been entirely smooth.

Within less than a year, Azaria has racked up a TikTok following of a whopping 1.5 million, alongside working with some of her favourite bands, having a swimsuit line in the works, and she’s just starting out. If that’s anything, she has also moved alone from Massachusetts to Florida to pursue her dreams of being a model, doing photoshoots and collaborations with some of the fashion industry’s biggest brands and is living her best life.

Although her life may seem perfect, Azaria has had to move past cyber haters, social media toxicity and fake friends and yet, she rolls with the punches and has now gathered a massive social media following. From moving across the country alone at 17, to discovering who she really is: this is behind the scenes with Azaria McKinnon.

As the pandemic struck the globe and the world went into lockdown, the Massachusetts-native Azaria found herself spending her time in the world of TikTok, as any teen would, but there, she found herself dealing with the world of fake friends. “In Massachusetts, all my friends were judging me and making fun of me for posting videos on TikTok. I moved out from Massachusetts to Florida and I was like ‘you know what? I’m just going to be myself and if they like me, that’s amazing’ and it was at the very beginning of quarantine.” After that, her success in the social media world was a domino effect and she kept hitting one milestone after another.

“I’m just going to be myself and do me and if they like me, that’s amazing.”

Before she knew it, she was building her social empire and collaborating with some of the most famous fashion brands in the industry. “It kind of kicked in when I was sitting with my friends at the beach and Pretty Little Thing messaged me on Instagram and invited me to their showroom in Miami. I remember thinking ‘oh my god, this has never happened to me!’ I was so excited.” At 1.5 million followers, it’s always easy to lose sight of your followers, but that’s not the case with her. Azaria always has her followers in mind. “I always think about the different people it can reach and when I post a video, I’ve to make sure that nothing bad comes out of it. I don’t want people to see my content and cancel me. Cancel culture is terrible, but it happens, so I definitely think about all the people that are going to watch my content.”

Like other content creators, Azaria has had to deal with the haters and roll with the punches of online criticism. With such type of toxicity and negative feedback coming in at a pivotal point of her life, it can get draining to deal with it. She is someone who comes off as very confident on-screen, yet Azaria will be the first to admit that she also goes through ebbs and flows in her relationship with herself, just like everyone else. “I used to be very insecure, I’m not going to lie. I used to read all my comments and let all the bad ones get to me. But then I had a conversation with my mom and my dad, and they made me realise that there’s other people out there supporting me, so I just ran with it!” When I ask Azaria about this clip, I can feel her passion through the screen. Her mantra is self-validation and idea of focusing on the negatives does not sit well with her. “I love myself and if some people don’t love that, other people will. I just have to be me and not always focus on the negatives. I don’t pay attention to the hate I get anymore.”

“I love myself and if some people don’t love that, other people will. I just have to be me and not always focus on the negatives.”

If Azaria wants her followers to take one message from her, it’s this: “Love yourself! Don’t compare yourself to anything you see on social media, because we all have bad days and all your favourite influencers all human. Being perfect is impossible because perfect doesn’t exist!” After a meteoric rose in followers on TikTok, Azaria began receiving many photoshoot opportunities and she was pushed outside her comfort zone. As someone who’s been homeschooled for the most part of high school, opening up to new people in the industry was daunting for her at first, but when she did, it felt rewarding. “I did a few photoshoots with the clothing brand, Adika, I’m super proud of those because it was such a cool opportunity and I usually get really nervous when I meet new people. But I pushed myself to get out there and do it and it turned out to be one of the best days of my life.”

It’s not always easy to put on a happy face and get out there to shoot content. With laser-focus on what she has her eyes on for the future, Azaria still motivates herself to do her work as best as she can. “I’ve always had a goal for what I wanted in the end and I’ve been really determined to stick to it. I push through knowing that there’s something better waiting for me at the end.” Alongside garnering thousands of followers on social media, Azaria is also pursuing her dreams of modelling and travelling the world. “I really just want to model and travel the world and experience all the different cultures. There’s so many places I want to go to, but my dream travel destination would be Tahiti and Tokyo”, she laughs.

As someone who has put herself onto a huge social platform and is being exposed to hateful people on a daily basis, Azaria admitted that it initially got to her and fuelled her insecurities. However, the isolation of quarantine allowed Azaria to discover herself and allowed her to grow as a person. “I’m doing really good right now. In quarantine, I feel like I really found myself and the direction I want to go in. I also became more accepting of myself. In quarantine, I was forced to spend time inside and that was for the best for me.”

While Azaria continues to thrive, she’s got a lot to look forward to in the coming year. Collaborations with the biggest fashion brands, travelling for photoshoots, and a self-made bathing suit line. It’s safe to say that we’re going to get a lot of exciting content from Azaria. “I’m definitely going to do a lot more photoshoots with Adika, and I’m going to travel, which is so exciting!” Alongside that, she’s also got a bathing suit line that is in the works and definitely something to look forward to.

As someone who’s been constantly creating content, Azaria has come a long way in the industry, and is now familiar with the peaks and downfalls, the pros and cons and what it really takes to be a social media content creator. As someone who’s ready to give advice to aspiring creators, Azaria says “Be consistent and always stay true to yourself. When you’re true to yourself and you’re not trying to be somebody that you aren’t, people are going to catch on and know that you’re cool and different and you’re giving them a reason to follow you! Do it because you love doing it and it makes you happy.”

In a matter of a year, Azaria has gone from being an unhappy teen in Massachusetts to being a social media creator living her best life in Florida and now she’s ready to embrace the massive changes of life and become the person she’s meant to be.