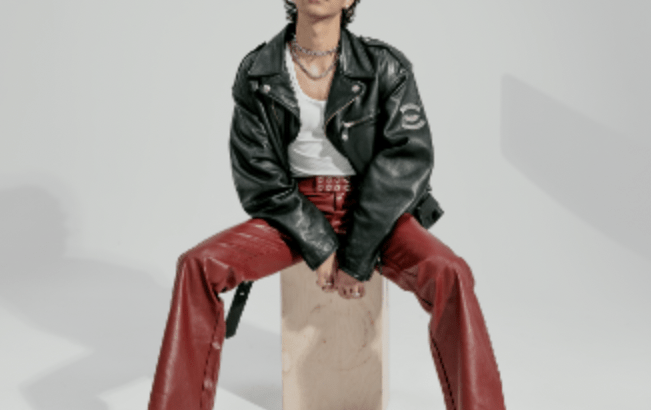 High-energy pop that fuses elements of different styles within it is the embodiment of Justice Carradine’s music and whole vibe. As an artist who’s unafraid to intimately share his life experiences, Justice is carefree and honest. You could take a look at his aesthetically captivating Instagram feed, and immediately understand his vibe. His extremely cool, calm and collected persona is reflected in the way he interacts, and he wants us to join him on his journey of further self-discovery and becoming more attuned to himself.

His debut EP ‘What A Weird Dream’ encompasses the entire way his mind works. Introspective, thoughtful, and sometimes unusual, Justice has transcended traditional song-writing. Fueled by the purpose of putting out honest music, he’s reframing the manner in which experiences are portrayed through music. Now establishing his dynamic musical abilities in a uniquely impressive debut album, Justice has officially established his voice. While reflecting on how his year’s been so far, Justice says “It’s been good! I’ve really enjoyed creating music and getting to put it out.”

By far, the element of relatability within his music is so striking, and so easy to resonate with. For him too, it’s a mechanism that allows him to connect with a community of people experiencing the same feelings. “It makes me happy that people are getting what I’m saying, and it makes me feel less alone because in my album, I talk about having my first panic ever. Then to have so many other people that I know and don’t know be like ‘yo, I also have those’, it’s just so cool.” He naturally represents the wide spectrum of human emotions, but arriving there involves multiple edits and alterations. While explaining his music creation process, Justice remarks, “It’s a little different every single time, but recently, I feel like I’ve gotten a better understanding of my own creative process. Right now, it’s like I go through something, and I think the biggest thing is whatever I’m turning that experience into is based on making the ‘first draft’. If you can get that out, from there, you can make as many revisions and evolve it as many times as you want to. It’s not letting perfectionism get in the way, cause you can go back and forth of what you’re making! That’s how I do it at least.”

It’s almost like he was born with it: the natural capability to sing and write. With heavy influences from his family, he grew up aspiring to do this for a long time. “I have loved singing since I was a small child. I just loved it. When I was little, I saw Avril Lavigne doing her thing, in her skater boy era. I thought it was the coolest thing, I loved it, I love her and I loved music. I grew up with my family who was always playing music. My grandpa was in a band in Hawaii, and he got all of the grandkids instruments, books on how to play them, DVDs. I was the only one who was like ‘this is cool!’, and that hasn’t changed.” As an artist who’s been brought up in Utah, Justice has more influences on his music than you’d expect, all of which have fragments scattered throughout his works. “I have four main artists who’ve consistently inspired me and I see elements of them in the music I create. Harry Styles, I love that man, Honestly, we’re all in love with him and I’m not mad about it! I really love Frank Ocean, Ariana Grande and Dua Lipa. With all the different inspirations, there’s one thing that’s connecting it all together, and that’s kind of the inspiration.”

What A Weird Dream truly captures human emotions in the most powerful way. The emotional journey through the whirlwind of a recording process is what Justice wanted to portray in his EP, and to say he succeeded would be an understatement. While reflecting on this, he says “I’m a true optimist, I’m a Sagittarius, I feel like we’ve just got that kind of vibe! But I can hear an underlying sense of holding back. I can hear fear manifesting, where I’m not like busting it wide open, you know what I mean? I’m limiting myself, so there’s some subconscious fears. I was questioning what might be beyond those, what might be beyond what I know to be as me. I think that ties in really cool with the album.”

“I want to feel free in my life, to do what I want to do, to be the best version of myself, to have my own opinions, to open up my heart.”

With a title that encompasses what listening to the album feels like, he tapped into his creative side relatively early on. “I’ve had the name of the EP just chilling with me for years. Actually, a couple weeks ago, I was going through my notes and I found the first time I wrote it down in notes, which was in 2017. And I’m 22 now, so it’s been a fat minute and I knew I loved it. I was going through a time when I was like ‘woah, that’s me’. I was realizing that I’m a human in a body, just living life. I didn’t really know how I felt about that, but I was like this is a weird dream. When you’re in a dream, you’re in one place in one minute and then in another random place in another minute. When it was time to make this EP, the whole process of making it, that’s how it felt. It was really random, so it was fitting. A lot of the songs too are a little peek inside my subconscious mind.”

However, Justice openly acknowledges that he has room for improvement, and working on that can allow him to carve his own artistic path, one that sets him apart from the bandwagon of others. “I’m craving intimacy. And freedom. Seeing how I limited myself a little bit with this project makes me want to do the exact opposite in the future, and just let myself be myself in every aspect. There’s no reason to hold back. That’s where I’m going. I want to let it all out. I want to show some metaphorical skin.” Having had this spirit naturally imbibed within him from the beginning, Justice says, “My family has always just encouraged me and all of my siblings to be who we are, to just roll with that and keep it one-hundred and keep it real. I’ve used a lot of that in my songwriting, and just art in general. I feel like when you’re honest in any of your art, that’s when it touches people.”

That couldn’t be any more true. With meaningful songwriting and dynamic production, the EP doesn’t leave a stone unturned. The lyrics most often mirror Justice’s thoughts, which are all interestingly unique. While unpacking this, he says “From ‘Tears in my Eyes’, my favorite lyric is ‘we’re strangers trying to walk each other home’. I love it because I had this vision of me and so many people, on this one-way road. We were all walking towards the same place. In my head, some people were ahead, some people were behind and some people would walk backwards too, some were doing what they loved, and I feel like that line was a parallel to the image I saw in my head, and it meant a lot to me. A big thing for me lately has been that nothing’s forever, and as much as I want them to be, they’re just not.”

As a young artist that’s racked up his level of success, be it his history on Vine, or now as a signed musician, he definitely knows the importance of gratitude and humility. “Honestly, I feel like it’s about keeping a beginner’s mindset. I’m grateful for everything that happens, but I’m still learning. I don’t know everything, I honestly don’t want to. I think staying excited is also a big thing.” Be it his energy across the screen, or the freakishly-honest music he generates, Justice is the embodiment of the word authenticity. When answered where he gets his unparalleled energy from, Justice replies, “My mom because she loves me so much. I get insecure sometimes, I get in my head and sometimes I want to hide away. My mom is always encouraging me, whether she knows it or not, to just embrace what’s out there. I also spend a lot of time in nature. I love being amongst mountains, and I feel like that’s also something I’ve learned from being in nature so much. I look at the trees and mountains and they’re just an example, cause they’re just being them, they’re not comparing each other. They’re all pretty in their own way. I feel the same way about us.”

Drawing inspiration from every exposure, that’s the sign of a true artist, which he has proven himself to be. Although he’s still learning and growing, as an adult, an artist and a human being, Justice has already set out to create a big name for himself through his distinctive music and hints of ambiguity. However, he intends to keep an open heart and mind, and wants us to join him along his way to further discovering his bounds. While reflecting on the legacy he wants to leave behind, Justice remarks, “Maybe that’s something that’s going to keep getting clearer as I move on with my life, but as of right now, I want freedom. I want to feel free in my life, to do what I want to do, to be the best version of myself, to have my own opinions, to open up my heart. Having an open heart makes me feel the most free, and I want to represent that.”

Stream What a Weird Dream