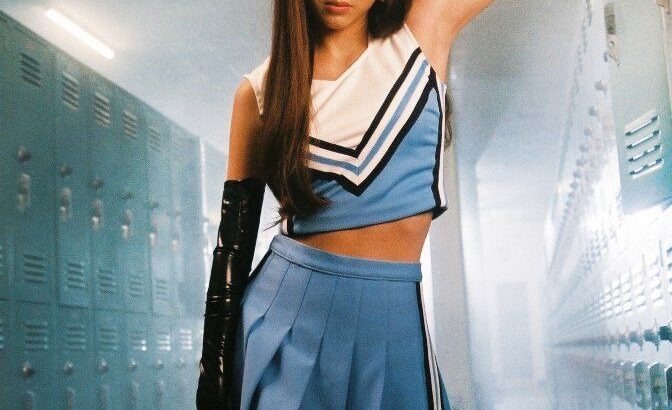 At the beginning of the year, it seemed like every teenager was listening to this one song – ‘drivers license’ by Olivia Rodrigo. From taking up the top spot on Billboard charts for weeks to breaking Spotify’s record for most streams in a day, that’s what you get for being the biggest song of the year. A modern pop ballad, which is well within the vein of Taylor Swift and Lorde, two of her biggest inspirations, has undoubtedly changed her life and transformed her into one of the biggest pop stars in the world. Following ‘drivers license’, Olivia went on to release two new singles, ‘déjà vu’ and ‘good 4 u’, both of which saw successes of their own.

Olivia’s highly anticipated debut album, ‘SOUR’, was released a couple weeks ago and has garnered massive praise from the music industry’s biggest names, who are also some of her icons. The track list, which features 11 songs, with production by Daniel Nigro is a masterpiece, which is equal parts achingly beautiful and exhilaratingly real. The combination of nostalgic lyrics and bitter moods; the uncaged emotion is what sets up the album for success – it has a high degree of relatability. Let’s break it down.

The stellar album starts off with a high-energy, punk-pop anthem, ‘brutal’. She goes ahead to detail the hardships of being a seventeen-year old and boldly brings out feelings that every teen feels at one point or another. A statement first track, it is unexpected with a unique melody and changing tempo, witty and a melodramatic pop track of broken teen dreams which sets up the listener for more surprises as they come. ‘All I did was try my best / this the kind of thanks I get / unrelentlessly upset / they say these are the golden years / but I wish I could disappear / ego crush is so severe / god it’s brutal out here’, embodies the essence of the whole song.

The achingly beautiful ballad echoes sentiments of raw anguish, hurt and anger and demonstrates Olivia’s powerful vocal control. The track details her pain and anger after seeing her ex-boyfriend with a new girl two weeks after they broke up and questions whether he truly loved her at all. The tones of betrayal is evident in the lyrics as well as in the emotion which she conveys. She sings, ‘you gave me your word but that didn’t matter / it took you two weeks to go off and date her / guess you didn’t cheat / but you’re still a traitor’.

This song doesn’t even need any introduction – an instant success, it is what transported Olivia from being an aspiring musician posting snippets of her songs on Instagram to being the owner of the biggest song of the year. In this heartbreak anthem, she belts the gospel-like bridge in a euphoric way that hits in all the hurting spots, which stems from a place of raw post-break up anguish and all-too-relatable teen relationship nostalgia.

The single that proved that Olivia is no one-hit wonder, in the song, ‘déjà vu’, Olivia brings up the often-forgotten concept of déjà vu and details the things she did with her ex-boyfriend, like ‘car rides to Malibu’ and ‘trading jackets’, which he now probably does with his new girl. ‘A different girl now but there’s nothing new / I know you get déjà vu’ captures the essence of the entire song. The changing melodies at certain parts in the song keep it interesting and fun to listen to.

The upbeat pop single, ‘good 4 u’ has grown to become one of the biggest songs on the album and with good reason. The uptempo pop-rock number is what you can call a savage kiss-off to a former relationship with a person who moved on too easily, it injects another element of surprise into the record. It starts off mid-tempo and builds to the unexpected throbbing chorus which gives off an early 2000s pop-rock music vibe.

The song is a clear demonstration of Olivia’s lyrical capabilities and vocal range. She talks about doing everything possible to be the perfect girl for her ex-boyfriend, but nothing she did was enough for him. ‘Stupid, emotional, obsessive little me / I knew from the start this is exactly how you’d leave’, shows how oftentimes we ignore red flags in relationships only because we love the person. The conversational flow coupled with the belting bridge makes this track an emotional one to listen to.

Olivia comes through with another break-up ballad, that comes from a place of raw nostalgia. The building tension, her heartache evident from the lyrics and emoting her words to a point where it rings in the deepest parts is what makes this track so special. It admits messy and vindictive feelings. Vibrating with high notes intertwined with possessiveness, Olivia sings ‘So find someone great but don’t find no one better / I hope you’re happy but don’t be happier’.

In ‘jealousy, jealousy’, Olivia explores the often looked-down-upon emotion, jealousy, which is something everyone has felt during their liftime, even if we hate to admit it. She boldly opens up about her insecurities and feeling jealous of the perfect-looking people who are out there living what appears to be her dream life. A lot of this stems from the picture-perfect lives that people put out on social media, as is seen in the lines, ‘All your friends are so cool, you go out every night / in your daddy’s nice car, yeah, you’re living the life / got a pretty face, a pretty boyfriend, too / I wanna be you so bad, and I don’t even know you’.

One of the most gratifyingly undignified breakup ballads on the record, the revealing lyricism on ‘favorite crime’ is what makes it so emotional. Olivia’s uncaged vulnerability and authenticity, the genuineness of her sound on this track, which is almost acoustic-like has resonated with listeners worldwide. She details the bittersweet emotions she feels after the breakup in the lines ‘It’s bittersweet to think about the damage that we do / cause I was going down, but I was doing it with you / yeah everything we broke, and all the trouble that we made / but I say that I hate you with a smile on my face’, her vocals take control over the instruments in this one.

Olivia closes the record with an emotional track that details the toxic upbringings of two acquaintances she knew when she was younger, who were disapproved of for being a part of the LGBTQ community. An anthem for people who have been put through rough childhoods, it echoes the sentiment of human empathy. She sings, ‘Well, I hope you know how proud I am you were created / with the courage to unlearn all of their hatred / god, I hope that you’re happier today / cause I love you, and I hope that you’re okay’, which closes off the album on a sentimental, but impactful note.