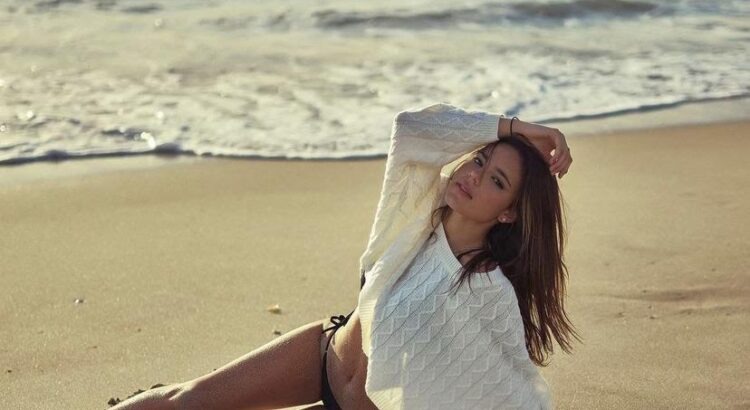 At the beginning of 2020, it seemed like everyone around the world, especially the teenagers were hooked on this one viral social media app, TikTok which soon grew to become one of the most used applications by Gen Z. While I adjust my laptop screen to the perfect angle, looking back at me is Ella Mendelsohn, the 16 year old girl who went viral on TikTok thanks to her boredom during quarantine.

Fast forward to May 2021, Ella has now built up a TikTok following of over a whopping 2 million, done an uncountable number of brand deals, has a self-made brand in the works, many projects and photo shoots set for this year and she’s just getting started. At 16, New York City born Ella has moved to Long Island where she attends private school while also balancing social media work and she often spends time in the city for work and photoshoots.

Overnight stardom at 16 years old? Check. Collaborating with some of the biggest brands in the industry? Building a social empire? A new brand in the works? Check, check, check. As glamorous as Ella’s life seems, her rise to fame wasn’t entirely smooth. From getting shadowbanned at 100,000 followers on TikTok to dealing with cyber harassment, this is: behind the scenes with Ella Mendelsohn.

When a life-changing pandemic struck the globe and the world went virtual in 2020, Ella spent her newfound free time online, as any teen would. Having spent 14 years of her life dancing and having a natural love for creativity, TikTok came easy to her. From having parents who worked in the fashion industry to an Instagram following of ten thousand at the age of 12, being an influencer was something she was fated to do. “My parents were both from the fashion industry and I saw them working with influencers and at that time, I was like ‘this is what I want to do!’ So I kind of always knew I wanted to be an influencer.”

After her success on TikTok, her next few milestones on other social media channels were a domino effect. “After my success on TikTok, I started YouTube and gained hundreds of thousands of followers on Instagram too and that’s how my social media career took off.” Being original, creative and positive is a mantra Ella lives by and when asked about her favourite aspect of TikTok, she says “I love being creative! Honestly creating my own content and having that kind of creative freedom is so great. I love doing outfit videos and interacting with my fans and followers, that’s my favourite part about the app!”

“There’s ten other people telling me I inspire them and that honestly means so much more than one negative comment.”

Recently, there’s been a lot of toxicity and hate on TikTok and a lot of criticism on the app isn’t even constructive. For Ella though, keeping her platforms positive is of prime focus to her, however as a 16 year old girl who’s still trying to answer questions like ‘who the f*ck am I?’, having to deal with that amount of people making frustrating assumptions about you can be draining. Like other TikTok stars, Ella has to deal with online bullying and haters. “Everyone says they don’t read their comments but everyone does. I mean it’s impossible not to. I do delete the negative comments and there’s also one person who left a negative comment but there’s ten other people telling me I inspire them and that honestly means so much more to me than that one negative comment. I just try to focus on the positives!”

Ella still attends private school, while also balancing work and creating content side by side. Being a 16 year old, that’s especially hard considering that these are the years where she’s supposed to be living out her social life. While reflecting on getting started as a social media influencer, Ella says “it definitely took me some time to learn how to manage my time. I wasn’t good at time management and I used to freak out because I had nothing to post and I would lose followers. So now I focus on my schoolwork during the week and shoot photos on the weekends.”

“I change in the car, I’ll bring twenty outfits, go to different locations and shoot every single one of them so I have my Instagram posts lined up for the week. That way, I can focus on school throughout the week.” Ella’s mom, Kara is her Instagram rock. “I could not do what I do without her. She takes almost all my Instagram photos, drives me to my photoshoots and manages all my emails. She helps me with everything. She’s a queen.”

After a meteoric rise in followers on Instagram and reaching new milestones on TikTok almost everyday, Ella took to the YouTube world to conquer it too. To her, it’s not entirely about the comments calling her a queen or a picture-perfect life. It’s who she is behind the screen and that’s a big reason why she loves YouTube. “I love it. I love YouTube. On TikTok and Instagram, everything is just glamorised and I always have makeup and cute outfits on and I’m always doing something crazy with my life, my life looks so interesting. But with YouTube, I get to show the real me, like ‘I just woke up!’, it’s more like an aspect where people get to see what I’m actually like in my personality and not just a picture.”

While Ella continues to live her life, she has a lot to look forward to this year. With a self-made brand that is under works and also majorly under wraps, she is also doing a lot of collaborations, some of them being alongside different content house girls, whom she says she ‘relates with’. “I’m definitely going to be travelling to LA a lot. I was there a few months ago and I met up with a lot of the content house girls. Meeting people with social media platforms like me is really cool because in Long Island, not that many people can relate to that or are going through the same thing.” While Ella remarks that it is best for her to work independently, she’s also working on exciting new projects.

“It’s important to stop comparing yourself to what you see online.”

“This sounds so cliché, but just be yourself! Especially in today’s world, there’s such a standard for everything. There’s a way you’re supposed to act, there’s a way you’re supposed to look, everyone is always judging you and everyone thinks you’ve to be a certain way. But honestly, if you just do your own thing (which I’ve realised over time), you’ll be so much happier. How many followers you have doesn’t matter. In the world we live in, everyone wakes up and scrolls through their feeds. They see thousands of pretty girls and think ‘why don’t I look like that?’ With everyone’s photos, even mine, it’s not what I look like ninety percent of the time. That’s just one version of the person and they don’t always look like that. It’s important to realise that and stop comparing yourself to what you see online.”

In less than two years, Ella has gone from being a trained ballerina (which she adds is something a lot of her fans may not know about her), to being a social media sensation creating her own brand; she’s now finally the person she’s ready to be.