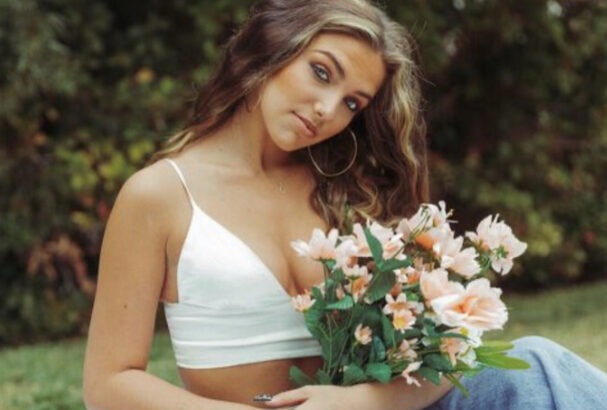 Incase you’re old enough to remember your life before TikTok, you definitely remember the good, old world of Musical.ly. From lip sync videos to dances to Drake songs and everything in between, recalling that stirs the nostalgia right up. Well the Musical.ly era may be long gone, but it’s stars still remain – one of them being Jordan Beckham. She’s the poster child of lip sync videos, the ones from 2017. What’s impressive about Jordan though, is how she’s managed to have this longevity in the social media world, through years of evolving trends – especially because social media can be such a short-lived career.

Today, Jordan has garnered nearly 4 million followers on the most popular social media app among Gen-Z, TikTok, been featured on the Moore Show and has done uncountable brand deals, collaborations and has many exciting projects under wraps. From moving to Las Vegas for a few months at 16, to developing thick skin after being exposed to online harassment at 12: this is behind the scenes with Jordan Beckham.

Reflective on how she got to where she is today, Jordan says, “I started making lip syncing videos on Musical.ly when I was 12 and gained 2000 followers everyday, which was a lot at the time and I was like ‘this is what I’m meant to do’. I then got crowned on Musical.ly at ninety one thousand followers, which was so insane to me.”

“I did not know this was going to be such a massive thing and my fifteen-second videos were helping people so much.”

Committed to this new discovery, Jordan consistently posted videos of herself lip syncing the trendiest songs on the app. As her platform grew, so did her fanbase where she started getting unexpected messages from people saying that she makes them happy. “As my platform was getting bigger, there were a few people who reached out to me who told me that my videos were an escape to them and I’d helped them to love themselves and be happier”, she recalls. “I also got a few messages on Instagram, where people told me that I’d helped them save their lives and I was like ‘I did not know this was going to be such a massive thing and my fifteen-second videos were helping people so much.’ My mom and I sent people books which would help them with what they were going through and I started connecting with people on a different level. It felt amazing.”

Putting yourself on the Internet as a tween can be burdensome – in the sense of receiving negative feedback at one of the most pivotal moments of your life. At the same time, you’re figuring out the answers to questions like ‘who am I?’. To top it all off, having an identity crisis at the same time as strangers on the Internet wanting you to be somebody you’re not can be draining. While reflecting on this, Jordan says, “when I was younger, I used to act like I was somebody else and I wasn’t true to myself. I was doing all these rap videos only because they were trending, but it’s not like I used to listen to those songs in sixth grade. At the time, all people knew me for was lip syncing, so when TikTok was introduced, I wanted to push myself out of my comfort zone, so I started making dance videos because I love dancing.”

After numerous viral videos on TikTok, her followers wanted to see the real Jordan, who she is behind the screens – so much so, that it lead her to start her YouTube channel a year ago, which she remarks, “is a lot of work, but is so rewarding”. From the day she’s started off, Jordan has been a real hard worker and by now she knows, it always pays off. “If you put so much work and effort into something, good things always come out of it. People don’t recognise social media as a real job, but it does take a lot of effort. I’ve realised with my viral videos and photos – if I just do things a certain way, brands reach out to me, my videos go viral and a lot of people enjoy my content too.”

It’s impressive enough when you think of all that Jordan has accomplished since she was 12. It’s even more inspiring to know that she is just getting started. Now, Jordan is pursuing and creating opportunities in this fast-moving industry. At the same time, there’s a lot of negativity involved in being a young girl, putting your life on the Internet. “There’s a lot of eyes on you. You’re putting yourself out there all the time, you just have to be very careful with what you’re putting out there because you can face backlash anytime. People also bring up old things that you’ve said or done all the time – but you just have to grow from that.”

“I’m putting my life on the Internet and I’ve realised that not everyone’s going to like me and I can’t please everybody. I just have to know who I am as a person.”

As glamorous to Jordan’s life seems – she also receives cruel comments, that go as far as cyber harassment and haters making frustrating assumptions about her, but she rolls with the punches and is now unbothered by the labels that strangers put on her. “The hate really doesn’t get to me at all. I’ve been doing this for a while now so I have really thick skin. I just think with all the hate coming at you – you just need to know who you are as a person. All the people who comment hurtful things or send hurtful messages – they don’t know who I am, they don’t know how I act, they don’t know anything about my relationships. I’m putting my life on the Internet and I’ve realised that not everyone’s going to like me and I can’t please everybody. I just have to know who I am as a person and the people around me also keep me grounded.”

A relationship that comes easily to Jordan is the one with her fan base. “The amount of happiness I can bring somebody is my favourite aspect about social media and meeting them in person is so much fun. I love meeting real people and talking to them in person – on social media, I can just see the numbers, like 3.8 million, so meeting them makes me feel like ‘holy crap! I can’t believe this is real’, but I’m so thankful.” Jordan’s mantra is simple: to be positive, authentic and creative and she fully recognises that and echoes the sentiment in her content. “I have this platform for a reason. These people are following me and they’re coming back to my videos every single day. Positive or negative energy does not stop me from what I’m doing, because I know the positive totally outweighs the negative.”

For someone who comes across as very confident on screen, Jordan will be the first to admit that even she goes through ebbs and flow in her relationship with herself. Moving across the country at 16 to such a fast-paced city like Vegas can be overwhelming for anyone, but Jordan’s mom was her rock through all of it.

“Positive or negative energy does not stop me from what I’m doing, because I know the positive totally outweighs the negative.”

While Jordan continues to live her life, she has a lot to look forward to in the following year and many projects that are majorly under wraps. She teases something that we need to stay tuned for: “It’s actually happening very very soon – a lot of my supporters say that I’m happier in Florida and at the beach so that’s all I’m going to say for now”, she laughs.

Before Jordan could define her narrative, she was just absorbing all the opinions people formulated about her. As a young girl, fighting the insoluble dilemma of adolescence, she often put out content that didn’t fully represent who she was as a person. Being an experienced content creator, Jordan offers advice to upcoming creators in the industry. “Just go for it and be yourself! It’s an amazing experience. Don’t switch up your content because that’s what other people like to see. You need to be yourself – that’s when I started growing and people got to know that I am an actual, genuine person. You have to have pretty tough skin, but over time, you’ll develop it. I used to get affected by the hate, but I don’t anymore. You just have to stay real and stay grounded. You’re going to meet so many people and it’s an absolute rollercoaster – growing, not growing, one day your videos do amazing and the next day, they don’t, but it’s all so worth it.” Positive and polite, Jordan also says, “I’m so grateful and thankful for all the opportunities that I’ve got. Go into it with an open mind and know that you’re going to do amazing.”

As a teenager who has gone through bad mental health days, just like everyone else, and has faced backlash from strangers on the Internet, Jordan is all about self-acceptance, growth, authenticity and being vulnerable when you need to be. “A lot of people, especially in high school and middle school are struggling so bad with who they are as a person because they don’t want people not to like them. I just want people to be themselves. You are created the way you are for a reason and you’re going to do good in life whether you see it now or not.” To her, it’s not all about the comments calling her a queen, but who she is behind the screen. “If you’re struggling with sadness or depression or anything like that, I want you to know that I am here to talk to you. It’s a rough patch and you’re going to get out of it. I know it’s hard to open up about your feelings, but I need you to know that a lot of people are here to help you.”

If she wants her followers to take a message from her, it’s this: “Always stay true to yourself and all of you are so worth it, I promise you that. You might not feel it right now, but so many people love you. Just go for your dreams and please, never give up.”

Speaking for the voice of Gen-Z, Jordan is personable, honest, and open about her struggles and insecurities. A true and genuine creator – maybe this is the reason behind Jordan’s longevity. She isn’t creating content to jump on bandwagons, but because she’s passionate about it – it’s an impressive skill and one that sets you up for the long haul in the social media world. Jordan has gone from being a regular teen to a social media sensation, and she’s just getting started.