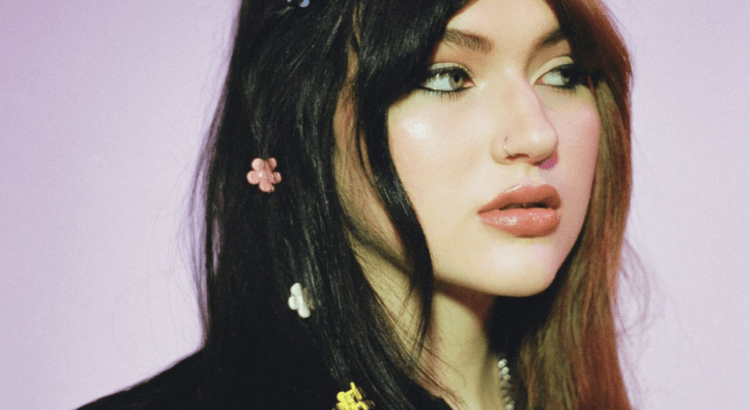 This time last year, it would have been hard to find anyone who knew the name GAYLE. Known mostly for her song ‘Z’ and her expressive hair, you definitely would not have seen her name plastered across almost every playlist, billboard. Then, midway through 2021, she dropped her single “abcdefu” – an irresistible blend of raw anger, disappointment and anguish towards her past relationship, over layers of electrifying vocals, and her world tilted. The song went viral on TikTok, following which it kept gaining traction at a fiery rate, and led to the music video garnering over 70 million views, alongside an incredible performance on ‘The Tonight Show Starring Jimmy Fallon’.

The song also went on to be featured on coveted Spotify-curated playlists, including ‘Pop Sauce’, ‘Pop Rising’, etc. where it now sits beside other pop icons like Doja Cat and The Weeknd, and also ranked as Pop Radio’s most added song. Amidst the centre of this craziness sits GAYLE herself, who, to make a point of noting, is just 17.

The pop hit is a dynamic blend of diverse emotions – anguish, regret, disappointment, anger, all of which fuse to form a passionately-delivered song featuring the heartfelt f-bomb, which strikes a chord in the ears of listeners. But how does all of this come about? Reflecting on this, GAYLE says, “I think my music creation process depends on the song and is subjective for every song, but most of the time it starts with a word or title. Before we start working on it, I also like to know the overarching theme for it – if I’m sad, if I’m angry, happy or jealous; what is the emotion we’re trying to capture. Melodies come first too – when we’re creating a song, sometimes you just mumble whatever comes to your mind. That either goes on to actually be a source of inspiration or it’s just “what the heck am I doing?”, she says with a laugh.

But where did all this inspiration come from in the first place? When unpacking how she got into the music industry, she remarks “Aretha Franklin is the reason I got into music. She’s always been a big inspiration for me and I absolutely fell in love with her music. I’m in no way saying my music is like ‘Aretha Franklin 2.0, I feel like it’d be so offensive to even try to compare the two. What she does is absolutely astounding.”

As an artist, who’s still exploring her path, her eclectic music gives rise to wondrous originality. Acknowledging the fact that she’s had many influences on her music over the years, GAYLE says, “I’m also really inspired by Julia Michaels, Chloe Lilac, Alanis Morisette, especially lyrically and even overall, I’m really inspired by their attitude and vibes. I really like writers who are able to have their own artist project and also write for other people at the same time.”

“A lot of my music stems from mistakes I’ve made and mistakes I haven’t made, from lessons I’ve learned and haven’t learned. It’s just a combination of all of my life experiences, put into three minutes.”

While her music is the auditory embodiment of rawness, GAYLE thinks her persona is the complete opposite. As a self-described people-pleaser who didn’t feel authorized to be her authentic self, she says, “I’ve always been that way and I would say I still am, you can never fully get rid of those kinds of things. But I had a friend group a couple of years back and I was always a watered-down, more acceptable version of myself around them. When I started getting to know who I was and felt the need to want to change as a person, I couldn’t actually do that because I was already so used to not being myself around my friends. Without those people in my life, I became so much more comfortable with my real self, but it’s definitely hard not to put on a face and try to please other people.”

GAYLE isn’t sure where her people-pleasing tendencies trace from or the crushing emotion she felt when she couldn’t fit in, but she is aware of the fact that music is her escape. “My songs come from experiences I’ve actually been through and feelings I’ve actually felt. The first song I wrote when I was 14, ‘dumbass’; I was going through a very insecure phase in my life. I was scared to do things I wanted to with the possibility of people not liking it. With my song ‘Z’, it is a fact that a lot of people make fun of Gen Z. But with that too, to take all that bullshit, completely twist it on its head and accept it for what it is, is ridiculous. A lot of my music stems from mistakes I’ve made and mistakes I haven’t made, from lessons I’ve learned and haven’t learned. Like in ‘happy for you’, it was about the pain I felt after the breakup. Seeing my ex happy outside our relationship was all I ever wanted, but I also felt sadness that he didn’t need me anymore, which was hard to come to terms with.” And that’s how she repeatedly captures the outsized feelings that run across every teenager’s emotions. “It’s just a combination of all of my life experiences, put into three minutes”, she says.

“I tried for a long time not to process my anger towards a certain person, because I thought it would make me less angry, but running away from it only made me angrier in the long run. I think especially as a woman, you can so often be labelled as petty or a bitch or crazy if you have too much of a reaction to something, and so socially you’re always just limiting yourself and suppressing yourself.”

All this unmistakable originality comes from a burning desire to understand her emotions and acknowledge the existence of every single one of them. “I don’t really have any anticipation for the music I put out, I just hope people don’t hate it. But one of my main goals is to give people a safe space to process their emotions, even if that’s anger or jealousy because acknowledging your mental state is so important. I also want to bring a sense of relatability; if I put out a song about something stupid I’ve done, they find pieces of themselves, and it’s more of ‘oh I’ve done stupid things too’, instead of ‘oh, you’re crazy for doing that’. It all ties into grounding us to realize we’re humans, we’ve been there and made mistakes.”

Throughout the unmistakable chaos of the pandemic, GAYLE continued writing songs and ramping up her efforts while doing so. And then she dropped the clearly-chaotic breakup single ‘abcdefu’, which shortly after its release, rocketed to reach Billboard 1 and secured her a top amongst a plethora of musical rankings, establishing her as a force to be reckoned with. A passionately powerful song, evident from ‘abcdefu’ that she’s releasing bottled up emotions that she previously felt caged to explore, which is a nod to the definitive patriarchal society we live in, even today. “I tried for a long time not to process my anger towards a certain person, because I thought it would make me less angry, but running away from it only made me angrier in the long run. I think especially as a woman, you can so often be labelled as petty or a bitch or crazy if you have too much of a reaction to something, and so socially you’re always just limiting yourself and suppressing yourself. We’re doing that so much everyday around people and in our personal lives too, that it just becomes this habit that you’re not even aware of. I know I was definitely doing that, but I was absolutely livid and it felt so liberating to pour my heart out into the song.”

So she continues doing that every day. Expressing herself in every possible way. Her orange and black hair, the nose ring she got when she was 15, being unafraid to display her quirks on social media, candidly capturing every single one of her emotions in the form of expressive music – she does this being consciously aware of the fact that she’s still young and has a lot to discover. Even with her newest single, ‘ur just horny’, it’s almost like she’s slamming open this door to a new type of creative genius that vividly explores thoughts that cross young people’s minds, which was earlier shut out from public exposure. “It’s one of those things where I’m still learning about myself and growing as a person. I’m also trying my absolute best to make sure I’m actually growing as a better person and moving in a forward direction, along with acknowledging the fact that something I like now is something I may hate two months later – but knowing that it’s important to be present in the moment. I don’t want to look back after 6 months and think ‘oh my god, I wish I had done this”, and that’s why she does everything without regret.

The embodiment of that is clearly visible in her music video for ‘abcdefu’, which keeps garnering an increasing number of views, and looks like it is on the road to hit a whopping number of views very soon. What remains so likeable about GAYLE is her authority over her life and the degree of reckless authenticity in all her projects. When reflecting on the filming of the ‘abcdefu’ music video, GAYLE says, “It was just me and my friends driving around town, listening and screaming the lyrics to our favorite songs, it was so much fun! There was a solid 10-15 minutes of us purely listening to songs like ‘Toxic’ by Britney Spears, and I was like ‘wait guys, we need to sing abcdefu!’ It was the craziest day.”

“You’re not with anybody else as much as you are with yourself, so you really have to let go of anything that’s holding you back from who you want to be. You’re stuck with you for the rest of your life, so you might as well be fucking happy about it, you know?”

Possessing a natural vivid remembrance, fused with music that unpacks the complexities behind our everyday relationships, GAYLE uses her platform as an accurate representation of ‘living life with no regrets’. “Again, I’m talking as a 17-year-old girl who doesn’t have the handbook of life whatsoever”, she says with a shrug. “But in my opinion, you’re not with anybody else as much as you are with yourself, so you really have to let go of anything that’s holding you back from who you want to be.”

It’s easy for listeners to escape into her utopic world of articulate duality and find pieces of themselves in her music. That’s what separates her from the stereotype of pop stars – she possesses an unshakable belief in her ability and is not constraining herself to just one thing. All the while though, GAYLE is laser-focused towards achieving her goals. “This is kind of morbid but we can die at any moment, and so the most important thing to do in your life is to try and make yourself proud, cause you’re stuck with you for the rest of your life, so you might as well be fucking happy about it, you know?”, and we can’t help but agree.