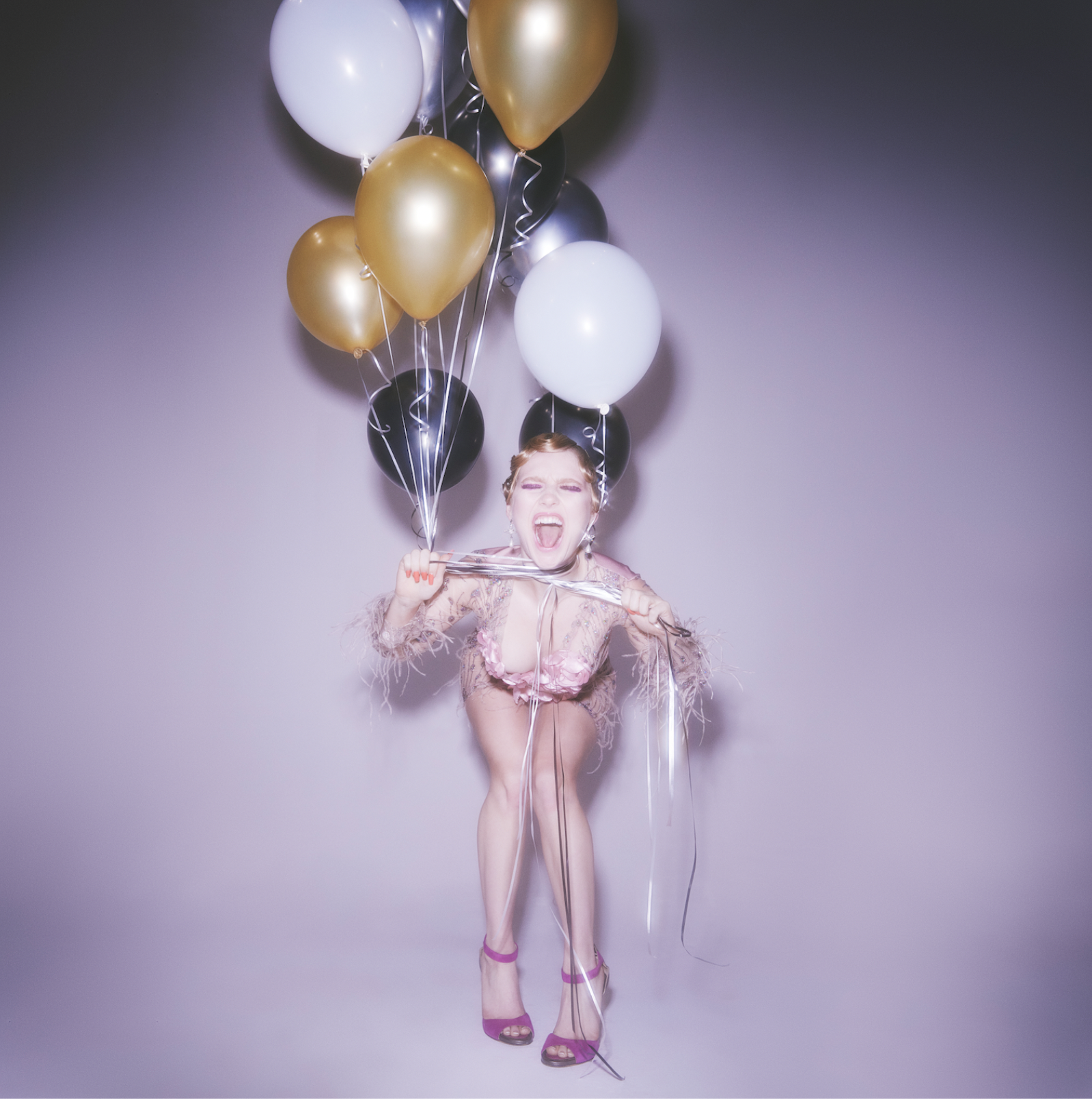 You know that song that makes you want to belt the words, driving on the highway with the windows rolled down? That pretty much encompasses Lily in every aspect in a sentence. From creating metaphorically and realistically musically brilliant world’s to encouraging women to be confident and authentic, this young rising pop star is already on her path to redefining what a role model is supposed to be, with her fearless rawness.

From overcoming a drug addiction that she went through in her early teenage years to now being the artist behind viral TikTok songs, ‘LilyIsThatYou’, the name she goes by as an artist, is slowly, but surely conquering the dance-pop realm of the music industry. When asked about how life’s been lately, Lily says, “It’s been going good! I’ve released Party 22, I shot a few music videos, I moved into this new place recently, I started going to therapy; there’s a lot going on. But overall, I’d say I’m pretty happy, my mood’s been good and I really feel like I can take on any challenge. I also feel like every day there’s a new challenge or one new thing I can cry about… Or five.”

As an artist who is still carving her path, Lily derives inspiration from megaminds in the music industry like Frank Ocean; she loves the way he incorporates metaphors within music. “There’s something special about leaving something poetic for the listener to derive and that’s something I always want to do, I always want to have that element of mysteriousness in my music, and he does that for me.” While she is still exploring all the realms within the industry, it is evident that she is already leaning towards dance-pop, and it only makes sense that Lily would idolise artists within a similar scope of creativity as her. Reflecting on this, she adds, “I also love Tove Lo and The Weeknd, because the way they fuse pop music with dance music, that’s really cool.”

Being someone who has always been passionately in love with music, Lily always wanted to make music. An intangible power to expand minor ideas into vivid imagery is Lily’s area of expertise. For someone who has a natural inclination towards expressing creativity through songwriting and music, Lily knew at a young age that she was meant for this, in the most distinctive way. “I always loved music, but I think the moment of realization for me was when I was 15, and I’d gone to a music festival in Toronto, and I was just so fucked up; it was the best thing ever. I stayed up for the next 3 days, I was so high and just wrote things down. When I was sober and looked at what I wrote, I was moved by what I’d written. Then I was like ‘why do I want to be a lawyer, what am I doing?’ From that moment on, I just started believing in myself, that nothing could stop me, you know?”

Having recently signed with the record label giant, Warner Records, Lily now enjoys the perks of being a signed artist. When asked about how it’s going, Lily says, “It feels great! It takes so much work off my shoulders as an independent artist and at Warner, I have so many people to bounce off of, and there are so many people who hold responsibilities with my music. Now I just feel like my responsibility is to be the artist, to be the creator and I’m really happy with my decision.

Just in time for all the new year celebrations happening (or not) worldwide (thank you Omicron), Lily dropped her party bop, Party22. “I made this song on my second writing trip in LA. I read this article in W Mag called ‘Party Like It’s 2022’ about how dance music is going to be so important for us to move past the pandemic, and how it was significant with moving past the pandemic in the 1900s, and this idea really resonated with me, like dance music defining eras. I’d saved this title in my notes app, and one day Kennedy (her co-songwriter) and I were scrolling, looking for something to be inspired by and we just immediately latched onto this concept.” Over layers of a stunning electric party setting, she comes through with neatly pulled off witty lyrics, which also forms the base for a ‘pretty perfect pop song’, in Lily’s words, and we couldn’t agree more.

With being such a natural artist, comes an expression of unforced emotions, which you already might have recognized as Lily’s forte by now. Her TikTok hit song ‘FMRN’ is the definition of drunk females feeling empowered, about their sexual desire, while also bringing attention to how it is not as openly spoken about and without good reason. “I literally made that song on such a whim. I was just making a song, you know as I do”, she says with a laugh, “and a part of me was like ‘this is going to be a hit, this is so empowering’. I was making it with my boyfriend, so the concept of FMRN came naturally, but when the video got taken down from TikTok was when I really understood that it became an empowering song for women, rather than just for me to express my desire. I definitely didn’t write it thinking that I want to be out of the box, it was just like ‘I’m fucking horny’, and what about it?”

Her music creation method always differs, but she always maximises the creativity and expression in her music, while ensuring they remain to be absolute bops. While explaining the process, she says, “It’s always different. Since I’ve signed with Warner, I’ve had the chance to work with so many amazing people, but most of the time, I’m put in a room with strangers like Lady Gaga’s producer, for example and I’m always nervous about those. But recently, I had this amazing session with this fucking amazing producer and my boyfriend where we came up with a really cool concept. But, broadly I really love creating new worlds; that’s always so interesting and it’s also not emotionally draining for me. Through that, I don’t feel the need to kind of tap into my emotions or talk about my personal experiences to make a good song. I feel really good when I can connect with a writer who can build those world’s with me.”

“I just don’t want to paint this picture-perfect sense of reality. Literally envy, comparison and jealousy are what social media thrives off of, and I do not want to feed into that.”

In a lighthearted way, she also drops the lyrics she likes the most, from the songs she’s released; “I’ll probably have to say ‘I’m afraid of who I’ll be/ if this love ends up ending me’ from FMRN because I am in love right now and god will I be afraid of who I’m going to become if or when this ends. Then from Party22, ‘Then I’ll probably be in the bathroom stall/ cause love’s a drug after all’, because I love how it all ties back together, like love is a drug and people go to parties and do drugs in the bathroom, so it was a really interesting concept for me.”

Seriously, through the screen, Lily is a bundle of authenticity and brightness, which you can feel through her music too. Someone who’s unafraid to express herself, her unfiltered vibe is a vessel for change and expresses an important message to young people who spend a lot of time on social media. “I mean, I struggled a lot when I was a teenager. I was a drug addict, then I became sober and now I’m kind of just in between, but I feel like the ‘raw’ part of those emotions come from what I went through when I was younger, and I feel like it would be an injustice to my 15-year-old self as well as my audience if I didn’t work really hard to incorporate what’s so shitty about being alive. I just don’t want to paint this picture-perfect sense of reality. Literally envy, comparison and jealousy are what social media thrives off of, and I do not want to feed into that.”

She drives forward what it means to be a true role model, and her goals always remain to be the powerful force behind her music. For an artist who has big ambitions that she’s motivated to achieve, Lily says, “I definitely want a Billboard Number 1. But other than that, receiving DMs from fans is definitely one of the most gratifying things. Like they loved my music enough to actually reach out and tell me how good the song is. I also really want to be globally recognised as an artist, as a little popstar”, she says with a grin. I can feel her passion for this radiating off of the screen. “But also, just getting the song out is so gratifying because after all this work; writing the song, picking a cover and everything else, it’s finally out.”

For someone who was exposed to a harsh environment growing up, Lily had met with a devastating drug addiction, from which she emerged strong, and now as a role model for the youth she shares her experience and some advice, she’d want young people to hear. “For me, it was just nobody’s voice was louder than the high. Literally, the people closest to me could tell me to quit and it wouldn’t bother me. I just want you to know that you are stronger than any drug, any other voice, you’re going to lose so many relationships, you’re going to miss so many opportunities, just for the high which only lasts so long, after which everything comes crashing down. I need you to be honest with yourself and really understand when it’s starting to affect your life. For me, it took a near-death experience to quit, but I’d encourage women to be honest with themselves because I think that that’s the only way to get past it. We’re kind of set up to fail almost, so I don’t blame anyone for anything. I believe in you and you’re going to get there!”

“What inspires me to be this open and authentic is that I don’t think I’ve seen it before.”

Her inspiration to be different from everyone else, or more like the most authentic version of herself stems from her drive to be completely open with her audience. “What inspires me to be this open and authentic is that I don’t think I’ve seen it before. Miley Cyrus is someone who I think has always been really raw and really open. I also feel like what inspires me is not having it, not having that kind of person when I needed it. I want to be that person for people, I want people to be able to look at me and not compare themselves. I also feel like being authentic is the only way to be”, she says with a laugh.

From a keen interest in staying real to having constructed a realm of music that doesn’t jump on trends, LilyIsThatYou has already strongly set out to create herself to be the embodiment of a pop star. Keep a lookout for Lily in the future, because we have a feeling she has the drive, the creativity and the authenticity of a real pop star.