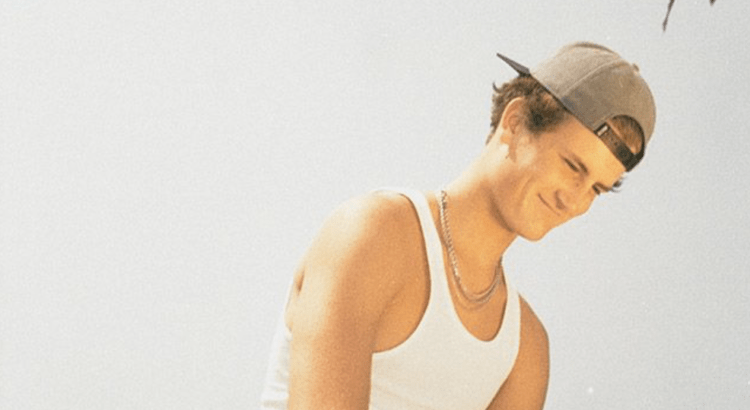 If you, too, find yourself to be inexplicably a summer lover, Arden Jones encapsulates what the season is all about. Despite being an indie musician, he’s definitely got his fair share of the ‘Cali-raised boy’ essence within him, in the best way possible. His style and persona reflect his upbringing, and he carries himself with a bundle of energy. His songs, in particular, arise from bursts of energy and capture the essence of the bundle of feelings that arise in different situations when you’re on the brink of adulthood, but not quite an adult either.

With vibrant songwriting and abstractly portrayed visuals in his modern-style music videos, his career as a musician took off after the release of his hit single ‘Parallel Parking’, and he’s now gone on to acquire the appreciation of thousands of listeners and fans worldwide. Even amidst the undeniable chaos of life lately, Arden often finds himself having a habitually optimistic outlook towards life, reflecting how carefree and fun-loving he appears on the screen. “Everything is going good! It’s kind of going full speed ahead, and I’ve been working on music every single day honestly, it’s what I do for fun too. It’s been a very good time but also a lot of work. I’ve made a big promise this year of consistently putting out music, so I’m trying to make sure that I hit all those marks and keep people happy.”

“I just want to leave behind good music and inspire other younger artists to keep making music.”

His undeniable ear towards music and passion actually allowed him to advance into the realm of professionals. While reflecting on this, Arden says, “Generally, in the beginning, it was just for fun and because I liked music so much. I would hear chords and instrumentals, and I also began doing vocals. I inherently felt like I could tweak and make a sound in particular that I liked. It was very unplanned, and it was just going with the flow, having a good time and finding something meaningful to write about. I was sure that I would be doing music for the rest of my life just because it felt so perfect to me, and I just have such a good relationship with music now.”

Arden’s music manifests a versatile approach to music that features a fusion of the glitz and glamor of LA, perfectly balanced with the humble, pure chill vibes radiated by somebody who spent a lot of time under the sun, surrounded by water. His ubiquitous upbringing and his father’s influence radiates everywhere, even appearing as fragments in his music. “My upbringing was everything. I grew up on a couple of acres of North Marin County. My dad also had a strong influence on me in terms of the music I like. My parents showed me what they thought good music was and I think that really stuck around. All of that plays into the music I’m creating.” This, tied in with the fact that he’s constantly listening, watching, learning and implementing from his musically-sound environment has an extremely positive influence on his span of creativity. Arden adds, “A lot of artists and creative minds are influencing the music I’m creating. Dominic Fike is huge, I think he’s a genius as a lot of people do, you know”, he says with a laugh. “Rex Orange County is so talented! Then there are also people I’ve seen in the last year like Sarcastic Sounds, an incredibly talented producer, writer, and Boon is amazing as well. There are a lot of people who can do the full circle; who produce and write music who I am super impressed by and it’s really cool to see. Mac Miller is a huge inspiration for me, I have a poster of him in my room!” Arden adds, “Dominic Fike’s first tapes were incredible, like ‘3 nights’ those kinds of songs just made me feel that there was a place for alternative music that is different. Dom’s just a genius, and then Mac Miller’s albums: ‘Swimming’ and ‘Circles’, mean something to me, especially because I’ve known about him and his incredible music since he was young, and it made me believe that it’s possible to transfer from hip-hop into alternative.”

All these factors sonically tune him to be a creatively gifted artist, who’s vast and varied insights allow him to flawlessly weave different elements into the music he creates. His highly polished tracks are laid back, yet powerful, hearty and full of life. While he’s popularly known to be an indie artist amongst the Gen Z and the Millenials’ younger proteges, Arden is making a conscious attempt to not pigeonhole himself into just one genre. This powerful move allows him to explore, experiment, create and then explore some more. This manifests itself in a tangible form with his newest release, ‘age tape 2’, a wonderfully creative project featuring three songs, each deeply personal to his own experiences. “The tapes are three-song projects that allow me to drop music, without labeling them as singles, albums or singles, but I figured a tape sounded good because it’s nostalgic and I can just drop a group of three tracks. It felt new, so I put it out.”

One of the tracks on ‘age tape 2’ is an incredible representation of the slow and controlled feeling of wanting to find yourself in a fast and chaotic world dominated by people’s opinions of you. “The other side refers to us being alone, without all the pressures from the world and insecurities that come from being around a tonne of other people. If I can just escape and find a little time alone, I may be able to find myself better. I know those are thoughts that go through a lot of people’s heads, so that’s where that concept came from.” The vibrancy, perspective and dimension on the track comes from his collaborators Josh Apple and Josie, who are “incredibly talented producers and writers. We’re really good friends and we were just sitting together and came up with ‘the other side’ on a live microphone!  We were playing beats and just messing around; we brought the synths in and we were like ‘wow! that feels so good!’ So we decided to move forward with the harmony and the belting and then it all built out naturally.”

Listeners are whisked away by his feel-good viral track, ‘Parallel Parking’, which features impeccable production layering and an intricate blend of intense vocals along with honest lyrics. The track conveys just the feelings Arden intended it to: the craziness of new love carried by an equal fusion of teenage infatuation and dizzy excitement. “That was the song that really started my career. I had a tonne of songs, but ‘Parallel Parking’ stood out to people as a soft landing, it felt easy to listen to in the beginning. That was the very beginning of me; understanding what it means to make songs that people want to listen to and make songs that are easy to listen to. I was just messing around in my room with some Apple headphones when I made ‘Parallel Parking’. I created a melody and the song for fun and I didn’t really think anything of it. I sent it to my sister, and she said ‘oh my god! you need to do music’ and I just laughed it off at the moment. I posted it but I really didn’t promote it. My manager found the song with a hundred plays, and talked to me; we just built everything from there.”

From a hundred plays to building a platform of hundreds of thousands of listeners worldwide, his infectious catchy hooks have evidently resonated with the ears of many. When asked about the most exciting part of his journey as an artist, Arden says “It’s got to be the live shows, they’re always the best. I played on ‘Unsilent Night’ in Dallas which was so cool, that was really awesome. I have a tour coming up and I’m so excited, on the West Coast. It’s all so much fun; to interact with the crowds and it feels like you are really in the music.”

His success over the past year has been crazy and with good reason. “I’m honored”, says Arden. “It’s been an incredible ride and I’m grateful that I get to do what I love.” While reflecting on his feelings towards being exposed to so many eyes worldwide, Arden adds “It’s a bit more nerve-wracking when you have people listening just because you know what you release is going to be judged in some form, whether it’s good or bad. People are going to have an opinion about it so that’s more nerve-wracking but also way more exciting and it makes me hungrier to drop music because I can’t wait to show what I’ve got. It’s a wild ride, but through everything, I’m just trying to stay authentic. My family, my friends, people I’ve known for a very long time have a strong effect on me.”

And so he carries out every project he does with the ultimate authenticity, and his bright, cheery personality reflects in everything. His incredible chemistry with music is demonstrated in every track he puts out and his sonic knowledge allows his creativity to blend in with intuition. When it comes to it, that’s exactly the kind of legacy that Arden wants to leave behind: simply put, ‘good music’. “I just want to leave behind good music and inspire other younger artists to keep making music. I feel music applies in so many places and so many day-to-day activities which is such a cool form of art.” We can’t help but agree. With his insouciant persona and carefree attitude, Arden is carving his path to becoming a widely popular artist and he wants everyone to join him on this ride.