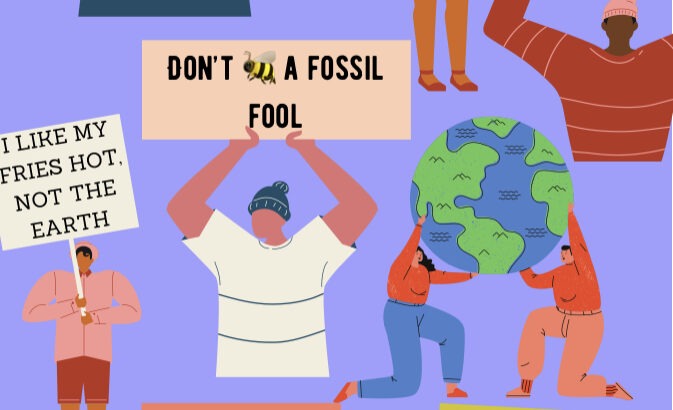 In this op-ed, The Teen Edit interviews a FridaysForFuture Representative, Dalila Nouame on what the movement actually is, how it is fighting for climate justice and what you can do to contribute.

Climate change is real anybody who is in denial of it needs to see the rising temperatures of the earth. It is no secret that we need to act as soon as we can, to prevent unspeakable an irreversible damage to the world and it’s beings. To help you understand how you can contribute to a better world, The Teen Edit interviewed a FridaysForFuture Representative, Dalila Nouame, so that everyone can have a clear insight into what it is and how you can help.

Tell us a little about the FridaysForFuture movement.

Fridays for Future is movement started by one student alone in summer 2018. Well known Greta Thunberg  began to stop attending school and instead protested in Stockholm. Since then, many young folks as well as some older ones across the world joined Fridays for Future aka youth for climate, Klimastreik . Not only does the movement contain many high school and university students there are also subgroups. The most well known are the Parents for Future and the Scientists for Future.

Together all of them are fighting for climate justice and everything that comes along with it.

How can the youth of today be involved in battling climate change?

We, the youth of today can think over own behaviour and try to live as climate-friendly as possible.

But this is hard on your own. Because many things are out of control, we need to get older generations into supporting us. One way is to talk to your relatives, etc. and try to convince them to focus on climate justice. The other way is protest and hold the people responsible and accountable for their actions. I’m very confident that we’re able to do that since at the end we’re all in this together.

Is it too late to take action?

Yes and no. It’s already too late to bring back all the species that died out because of the changing climate they weren’t able to adapt to. It’s already too late prepare all the land damaged through fires, floods and storm and we can’t revive the people that have died in those catastrophes which wouldn’t have happened or would have been less damaging without global warming.

And even if achieved the 1.5 goal there’s only ⅔ chance that the earth won’t start warming itself up uncontrollably. But the less action we take the smaller are the chances of preventing this from happening. Every action we take will have an impact on the intensity of the crisis.

In what ways can a person contribute to prevent climate change on a day to day basis?

There a lot of things you can do and there I’m sure you can get more detailed information on this online but some things I try to do is taking the bike or public transportation. Eating less meat and other products made from animals especially from cows. Try buying local and seasonal food. Use reusable cups, boxes, etc. Reduce, reuse and recycle.And so on and so forth.

Even though it’s unfair to expect everyone to live ecologically friendly even though it’s often made very difficult we have to be strong and you’ll see many things will be easier to implement in your life than you thought they would be.

What are the most important factors that contribute to climate change and how can we do away with them?

It’s hard to point the finger at a specific thing cause people will always try to attack what you’re saying by saying this industries are just a small percentage but when it comes down, everything plays a small part. We need to reduce the amount of carbon dioxide emissions made in every sector.

A couple ones that make up high percentages and are so ridiculous are fossil fuels, transportation, agriculture. They’re all so extremely ridiculous because we already have solutions for them.

Many experts say that here in Germany, we are able to implement ecological types of energy without having more costs and some even estimate it would be cheaper. Also the amount of jobs lost through the reduction of these energy types are way higher than the number of people currently working in the fossil fuels industry.

Then, for transportation we already have trains and bikes but for many years both of them have had to back down in front of the car industry.

Then, we have agriculture. Why are we shipping food around the world when we have farmers at every place on earth?

Do you support plastic ban? Why?

We do support it. Reducing plastic is a topic we talk about a lot on our demonstrations and on our social media. Not only is the plastic industry bad for the climate it destroys our environment as well.

How has the ever rapid climate change been affected by COVID-19?

At the beginning of the crisis, people were trying to find the silver lining. There was largely broadcasted news that the Corona crisis will have a positive effect on the climate and the environment. It might be true that the carbon dioxide emissions and the amount of air, water and land pollutions were going down when the entire world was shut down, but if we continue the way we acted before, the numbers will rise up again. There might even be a spike if industries try to compensate the losses of the Corona crisis.

It is extremely evident that our earth needs help. We cannot waste another moment being selfish because time is running out! I urge each and every one of you here to implement changes in the way you live. Choose sustainability. Choose the future. Choose the Earth.

We Need To Talk About Women In Sports
Selena Gomez Has Made Rare Beauty A Mission-Driven Brand & Here’s Why It Matters
It’s 2021: Things To Normalise Right Now
The Chilling History Behind Halloween

We Need To Talk About Women In Sports
Selena Gomez Has Made Rare Beauty A Mission-Driven Brand & Here’s Why It Matters
It’s 2021: Things To Normalise Right Now
The Chilling History Behind Halloween